Jude’s Nanna started a tradition.  She tells her kids “the story of the day you were born”.  I’ll admit I used to think it was kind of quirky, but it’s endearing.  You can feel the love in the story when it is being told.  And now that I’ve been part of the miracle that is childbirth and motherhood, I know how it feels to want to tell the story, more than once a year.  And I do, because, well, the end result of the story is magical!

The Story of the Day I Met Jude:

I arose around 5:30 in the morning.  I got up with an imminent need to relieve my bladder (as most pregnant women do, not to mention the ones who are past their due date).  I returned to bed, flipped the pillow twice, threw my leg over the body pillow and tried to settle in.  I wanted to get some more rest before I had to get up and get ready for work.  I noticed my back was aching.  I thought nothing of it, tried to shift my position a bit and closed my eyes.  The back ache subsided.  The back ache came back.  I repositioned my body again.  This cycle repeated once more before I realized “OH GOD, I’M HAVING EARLY CONTRACTIONS IN MY BACK!”

I laid there, debating on whether or not to call or text Melissa (Jude’s nana, and my Lamaze partner aka Mama Bear).  She was about a 40 minute drive away and I didn’t want her rushing to my apartment just to sit and watch me do nothing.  With that logic, and instructions from the Lamaze instructor I decided I would get up and eat something before deciding.  I heated myself a breakfast sandwich and settled in to the recliner.  The contractions moved to my thighs and I talked myself through them.  I decided to text her at some point when my breakfast sandwich was in the microwave.  When she came in the door, I had the recliner fully extended and was grunting through a contraction.  I could hardly talk through them.  She dutifully timed them (after unloading what seemed like a truckload of miscellaneous stuff in the nursery) and then it was decided we should go to the hospital.  I remember putting up a stink about wasting gas or something because I literally lived right across the street from the hospital.  We drove.  …after I vomited my breakfast sandwich in the alley.

The next 2-2.5 hours were the fastest and most emotional ones I’d ever had.  As time wears on, the exact details fade, but I remember being surrounded by all women until the very last point, at which Dr. Dowell came to deliver Jude.  My nurses were fantastic and they medicated me just correctly so that I wasn’t drugged feeling or in intense pain.  Jay’s mom and my mom were both there, encouraging me to do my best.  I had to wear oxygen during the last part, and push only every other contraction because Jude’s heartrate was dropping during them.  Then they saw how big his head truly was and how little my body and had to assist him out.  (I’ll tell him when he’s 12 that they got the Eureka and vacuumed him. LOL)  After what seemed an eternity of them measuring, prodding, cleaning and swaddling him I got to hold him.  He was here.  He was mine, all mine, and beautiful and everything in my world changed the instant I gazed into his blue eyes.  His father called soon after he was born, and I held the phone to his ear.  Jude knew the voice, and in that moment I was at peace.  (Sitting here, typing this and listening to Jude play and interact with Kane brings me a new color of peace.)

Jude Michael, you’ve helped me become a better woman.  You’ve taught me how to love unconditionally and how to see the beauty in the world.  Through your eyes, anything is possible.  When I look at you, I know God is real and He is merciful and graceful.  I love you to the moon, Jude, and am proud you’re my son. 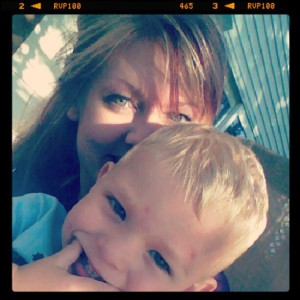 One thought on “The Story of the Day You Were Born, the Jude Michael edition”